This chapter is pretty similar to Vol 1, Ch 6, but it shows how the world has developed since then, and how the characters have sort of settled into different roles.

The new character's lines are in a very thin font, probably to indicate telepathy. The font I ended up using is more cursive and loopy, so it's not a perfect fit, but I think it works well with the intent of a personal communication.

I think John's “Gillman” shirt is a reference to the planned, but unfulfilled idea for a Carpenter-directed reboot of “Creature from the Black Lagoon”. I'm not entirely clear on when these chapters are written, so the reference may have predated the project's cancellation (or at least public knowledge of it). 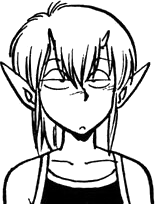