So, this is “Space Family Carlvinson Original”. It's the version that ran in Animage Comics for some time, before the series moved to Shounen Captain and restarted. By the time this version was collected in a tankoubon, however, the version we've already seen had also started compilation, so “Original” was added to the title.

Anyway, this version is a bit more whimsical and childish than the other, and the setting is naturally smaller. There are quite a few elements (typhoons, a wolf-man, references to Hokkaido) that carried over in different forms to the longer version.

This also contains a short gag series called “Go! Space Patrol”, which features alternate versions of characters from the Frontier Space Patrol. They can't be in the same continuity as main Carlvinson, but they don't interact much with the cast of Original Carlvinson either.

As I couldn't find a scan of this anywhere, I did the scans myself, so you get raws if you want them. I had to mess around with the levels a lot to get this one looking decent; the copy I got was yellowed enough that I found it difficult to apply black/whitepoints while still keeping the tone the same.

This version also has the sound effects drawn a bit more integrated into the artwork, to the level that I consistently felt I couldn't erase them without losing information, so I didn't. Hopefully the result isn't too annoying.

Anyway, I'm going to wait for about a month, then put up torrents for all of these. If you happen to spot typos or editing mistakes, please feel free to send me an email and I'll update things. 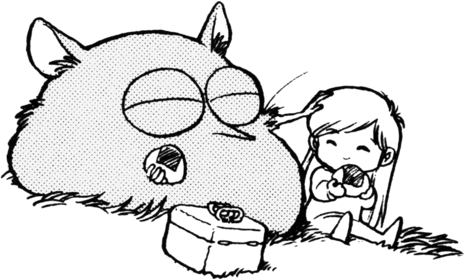