These two chapters aren't related, but the next two are, and I felt like it.

In the first, Corona and her family go for a drive and everyone has a good time. Corona and Jisso's dialogue in the first few pages has a few references to a certain political scandal (Japanese) that was major news around 1993, during an election that drastically upset Japan's political landscape. It's known simply as the “General Contractor Corruption Case” on wikipedia, among other scandals that season. Here is one archived news story in English that I was able to find.

In the second, we get another special episode, this time regarding the classic story of The Hare of Inaba. The casting is unfortunate given our other options, but at least it's not Chika. It also works in service of a really nice pun (in Japanese) that I don't think would be at all possible to do justice in English.

There's another story mentioned, Kachi-kachi mountain, which is also worth the few minutes it takes to read. 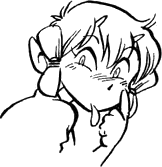