Corona has a strange dream, and somehow this leads to an old adversary rearing its head once again. I'm pretty sure the first few pages of this were in color, but I can't find a version that still has the coloring.

I'm not sure if the title (which is originally transliterated English) is specifically a reference to anything. Japanese wikipedia's entry for “Basket Case” describes the song by that name by Green Day, which was released within a year or two of this chapter (I'm a little fuzzy on the exact dates of each of these chapters due to jumps of serialization). What I'd guess is more probable is the film series from the ‘80s. 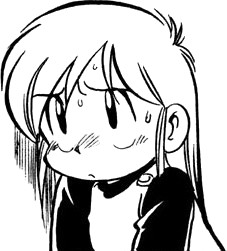