Some people come to Anika, the cast acts normally, you know the drill. The title doesn't seem to be a reference to a song, but perhaps to a story (Japanese) about young detectives.

The pun on page 69 took a lot more work than it should have to translate: the match is close enough in Japanese that I initially thought the joke went on for longer than it does, into enough lines that finding an English analogue was proving impossible.

The pun isn't my biggest regret in this chapter's translation, though. That's the term “human cannonball”, since I've been trying to avoid the word “human” in a story which has humanity being an unknown species as a foundational supposition. The Japanese word 人間 (ningen) carries a societal as well as a taxonomical meaning, so I usually translate it “person” or “people”. There's no clean way around “human cannonball”, though. 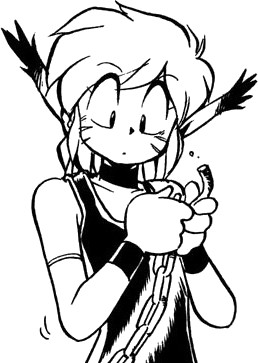