Sorry, there are a lot of annotations in this one. Not even for puns or rakugo, either, just names of things. Ah, well.

This chapter also contained a severe test of my policy of translating as much Japanese text as is reasonable: the bedsheets. Father's is covered in 鰯, probably referencing his cooking, and Kurosawa's is covered in 乱, the title of one of his most famous films. It seemed to me that letting Ran go would be removing a bit of context. I guess the new line I draw is somewhere between natives’ head-kanji and bedsheets, huh.

The song Belka sings is Yamaotoko no Uta, and is roughly about a parent gradually accepting that their daughter is in love with a yeti. Knowing this manga's song references, it was probably featured on some NHK educational drama back in the ‘70s that barely has a stub on Japanese wikipedia today.

Also, the Star Wars references have a write-up here (archive). 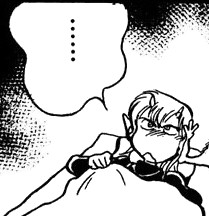