This is tied for the longest chapter so far, and it's really two small stories stuck together. The title is probably a reference to a long-running show called “Junior High School Diaries” (Japanese).

Now is also a good time to talk about the physical school building. Asari based it on the Numahigashi Elementary School, also known as the “Round Schoolhouse”. From what I can find, the building was constructed in the early 1900s, and was abandoned in the 1970s. Today, it's a destination for urban exploration and is known for paranormal activity. There are some daytime photos here. There might be some videos of night exploration as well, but the links I've found are dead and the big Y's searching is pretty poor.

The textbook jokes that happen early on are related to these events. The joke on page 21 (023.jpg) might be a continuation, but it might not: I've addded the “to our tune” to Corona's line to try and tie it together, but it's quite possible that she's referring to something else entirely that I don't get.

On page 32 (file 34), one of the video game references is a sign saying “I like strong people!”. The reference appears to be a franchise called Musashi, the Samurai Lord which spawned an anime and a couple of video games in the right time period to be mentioned here. The anime is mostly a retelling of various samurai legends, but the main characters are all robots. 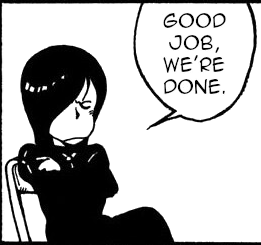