This is the They Live homage. It's a pretty hard story to adapt to a setting that models rural Japan, and whose cast is already almost entirely aliens, but I think Asari does it justice. Once more, John Carpenter appears in a chapter that references an in-universe film that he apparently made. You'd think he'd start catching on by now. 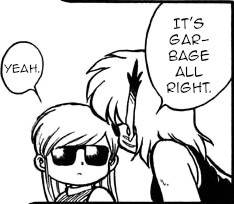