I promised I'd eventually get around to this, and here it is.

First, I realize that I messed up the leveling for the raws. By using a linear scaling command, regions of the image that were supposed to be kept dark were made slightly brighter, and the effect was to wash out the entire image. It's fine to look at, but when editing with dark black text it becomes very obvious.

Imagemagick doesn't have a built-in arbitrary curve leveler, but it can take a LUT so I made a decent one in GIMP and re-made stage 3, then extracted the mask from stage 4 and reapplied it. It looks okay, I think.

Anyway, Takemoto Izumi is an author that I've wanted to see translated for a while. He's considered rather influential, but very few of his works have made it over to the English-speaking world. This was relatively easy to translate, since the audience is for younger children. The contents are short, charming stories with a slight hint of science fiction strangeness.

This is sometimes called “Lup Salad”, because さらだ is both a female name and the transliteration of “salad”. Within the story, Sarada's name doesn't appear to be unusual, so I think when translating I must avoid the meal interpretation. 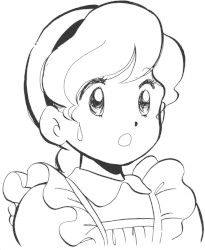