The title for this chapter is 大いなる旅路, which is the title of a 1960 film about the career of a railway engineer. It's mostly a setup chapter, bringing in some devices that will be used later (the doctor makes another one-panel appearance as well).

Surprisingly, Father's picture gag isn't a pun at all. John's “explanation” of trains, on the other hand, seems to be referencing something (a youkai story? a manga? a movie? a pun?), but I'm not quite sure what. 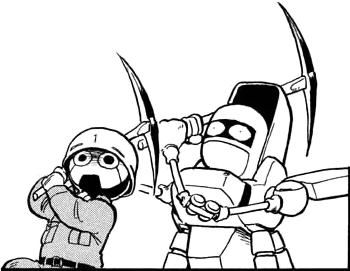