The word in this chapter title that I've rendered “revenge” is 逆襲, which is fairly common: it also appears in “The Empire Strikes Back”, “Godzilla Raids Again”, “Char's Counterattack”, and of course “Wrath of Khan”. It carries a slightly different connotation from “revenge”, but in context the meaning is definitely “the word you use to denote a sequel”.

The doctor (from Super Robot Mach Baron) also makes an announced second appearance here on the title page. He'll show up again in a few chapters (or would that be a few chapters ago…?). 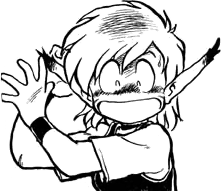