This chapter sees the introduction of “Rainbow Man”, based on the 1949 film (subtitles) and the 1947 novel of the same name. The film was remarkable for being one of the first Japanese films to use color for some sequences, but those masters have been lost and the copies we have now are apparently reconstructed based on first-hand accounts.

The film is a classic whodunnit, and it appears that the character Asari brings in is a descendent, in a sort of Lupin III situation. His bloodthirsty nature is amplified, and the mask and cape are new, as is his irritating habit of using lots of difficult-to-translate wordplay.

I thought about trying to approximate the rakugo jokes with English alternatives, but I wasn't able to get close enough to feel comfortable completely replacing the content. 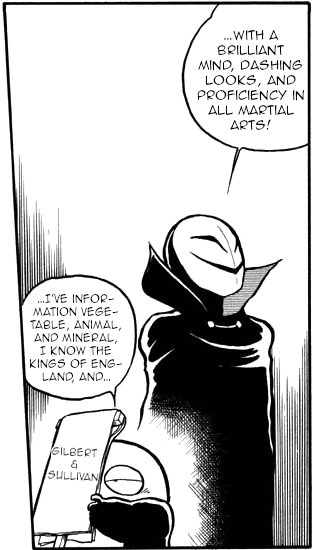