Chapter 12 doesn't exist. I actually discovered this purely by coincidence, right after releasing Chapter 13 (as Chapter 12), but it's a good thing I caught it. The raws I'm using come from the 11 volume Kodansha compilation, which omits chapter numbers (perhaps because of this very circumstance), but the Tokuma Shoten compilation (which is less complete) includes chapter numbers, and therefore includes this reference: the chapters skip from 11 to 13, with a note saying that chapter 12 has been lost.

In any case, this is probably a reference to Ultraseven. The monster in Ultraseven's episode 12 was considered very similar to a survivor of a nuclear attack, and after some outcry the episode was banned and completely erased.

Chapter 13 completes Volume 1 (or starts Volume 2, depending on which compilation you're using) with a certain girl learning a lesson about compassion, and an entry into a long and honorable tradition of illustrations of strange alien/robot Santa Clauses. 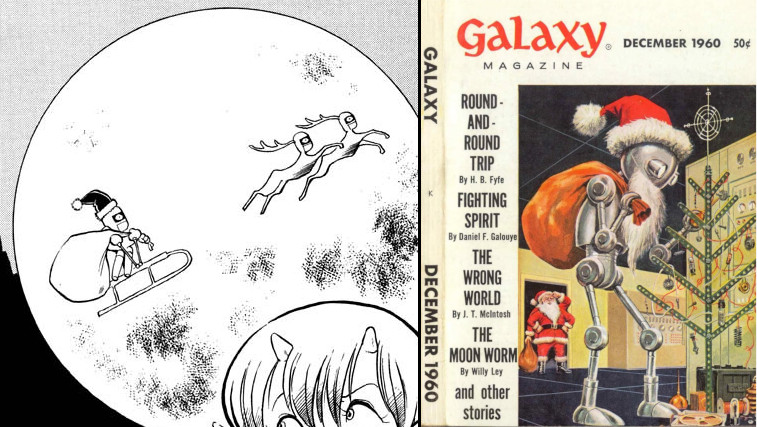 The chapters start getting longer now, and I'm going to have to drop down to 1/week. Perhaps I can build up a buffer and get back to a faster release after a while.