See chapter 30 for who the natives actually reference.

Parker's name and appearance come from the covers of the translations of Fred Saberhagen's Berserker series. 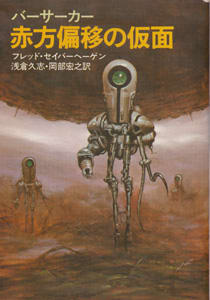 The legend of a carp becoming a dragon by leaping up a waterfall is apparently a Chinese allegory for a public official passing examinations. This raises interesting questions about the backstory of the universe, but it also gives an excuse for Belka to wear an extremely ‘80s biker suit.